IT industry state: world trends and pay rates in 2022

The last three years bring some drastic changes in our lives – COVID-19, mass lockdowns, general economic crisis, wars, and refugee crisis. All those forces majeure compelled world economics to adapt in the short term and discard everything that interferes from moving forward. But, surprisingly, and at the second thought, absolutely obvious – the IT industry not even showed any tangible downturn, but on the contrary, a significant growth. Obvious, because like during the plague in the Medieval ages, the development of science, arts, and architecture haven’t stopped, so the IT industry doesn’t have much concern about the last three years of the shocking mess we observe. Maybe IT is not the biggest industry in the world (it’s only 6th by the size and not even in the top 10 by employment), but it’s definitely one of the most important industries for the next 5-10 (or 20-50 🙂) years. 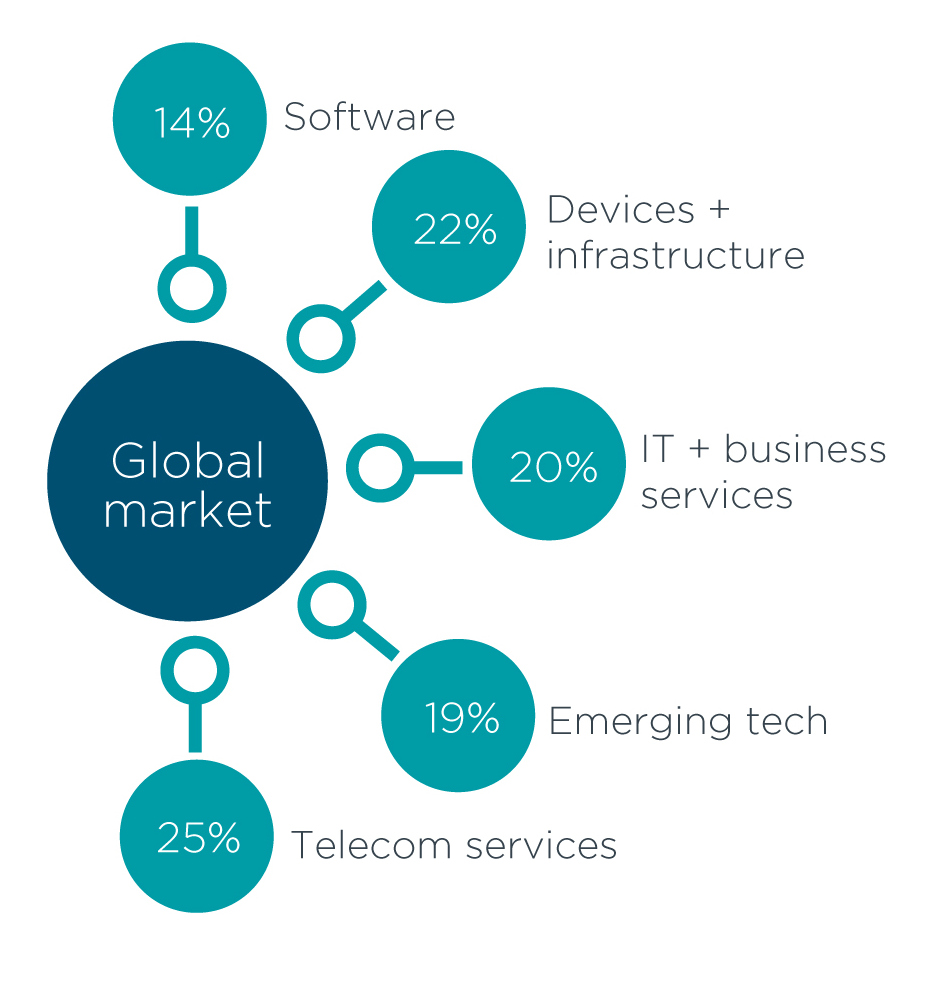 According to recent research, the global IT market is expected to grow by almost a trillion dollars at an annual rate, from $8.38 trillion to $9.33 billion. 11.2% of growth amid a general decline, mainly due to companies’ reorganization and adapting to a new reality – a decrease in commercial activities, remote work, and remote employment. The approximate prognosis for 2026 is 10% annual growth with $13.8 trillion in revenue. Of course, there is not only a pandemic, which affects negatively world economics. Let’s not forget about wars and politics. A single move of one insane politician could (and already did) plunge the world into a new crisis.

Learn how the Ukrainian IT industry continues to work during wartime and makes progress.

It could sound weird, but the IT industry become more digitalized. Numerous companies are now choosing to host their applications in the cloud. Companies are also turning more to cloud-based data storage. Such tendencies are boosting the demand for IT services. More development equals more demand for maintenance and support. Simply put, the IT industry boosting itself.

Another interesting tendency, which appeared in the last five years, is an increasing interest and prevalence of open-source software. Open source has become a common thing for developers of any level of skill.  94% of organizations today rely on open source in some forms. The most common reasons to use open source are to “drive innovation” from the management’s point of view and “ease of adoption” from the developers’ side. Swingeing majority of developers consider open source offers a “higher level of security” than proprietary software. 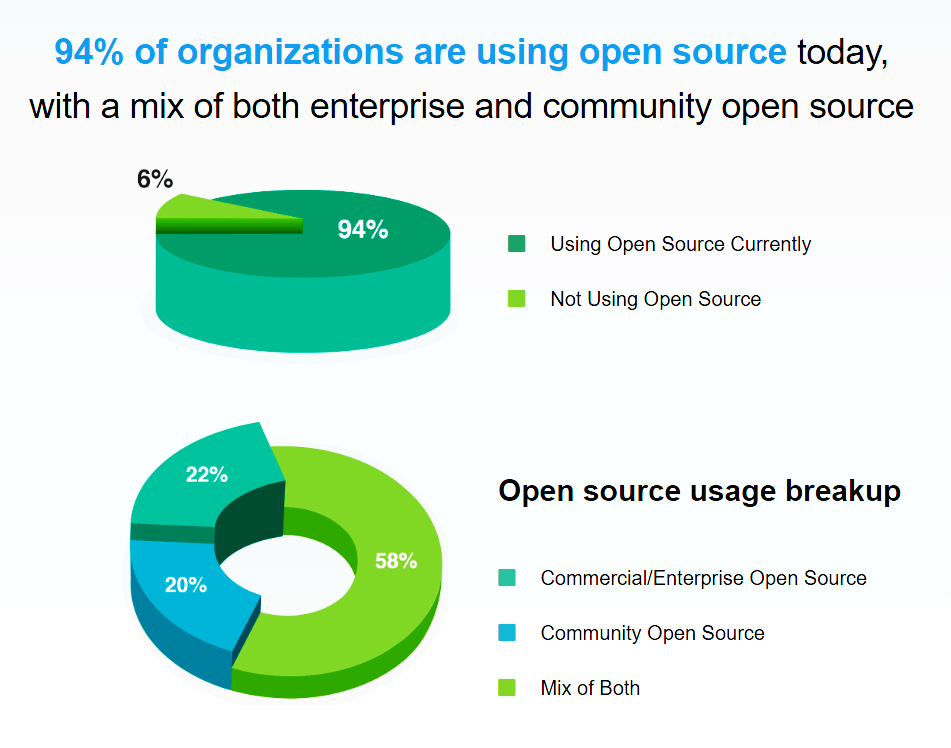 Today, web and software development become mostly remote jobs. The developer you are working with could locate anywhere in the world. Thus, you have the widest choice of specialists from any country you want. The prices differ drastically from the low-level specialists to seniors from country to country. And while you are deciding, it appears, you have options between expensive, but high-quality, and cheap, but average. Of course, like any other digital industry, IT is widely globalized. Your or hired agency’s team could contain people from every continent, and you may even never meet every one of them live. But anyway, the worldwide IT industry is notionally divided by regions, which have their specifics, work habits, styles, and even traditions.

There are several major regions we are talking about: 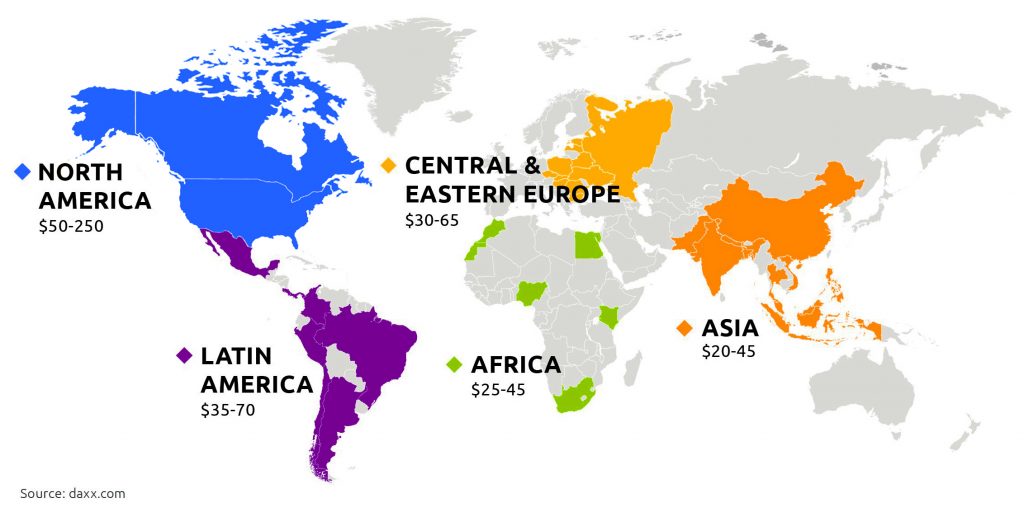 North America is the second-largest region of the IT market by 2021. No offense meant, but when we’re talking about North America, we meant USA foremost. 7 of the top 10 world’s biggest tech companies are located in the US. The United States was pulling the best specialists from all over the world for the last decades. High-quality human resources, in their turn, are attracting funds. Such a high concentration of money, high-skilled people, and infrastructure become a reason why the US IT industry is most demanded, but the most expensive.

US biggest cities offer the best conditions to IT specialists – the best salaries, the best infrastructure, and the biggest professional communities. But “big city” equals high prices for housing, services, commodities, and products. As a result, IT companies are forced to set higher prices for their services. Plus, indeed the highest quality services cost more. Thus, the average pay rate of an IT specialist is $150 per hour (in the range of $50-$250), which is at least 2 times more than the average pay rate anywhere else.

If you are a company from the US, you most likely will be able to afford local IT services. Maybe, they would seem a bit pricey for you. But you will get the guaranteed best services. For other parts of the world, hiring specialists from the US is like buying a luxury car – the price is definitely high, maintenance is expensive, but the output is great. So, if you have enough resources to handle this without prejudice to your business – go for it. But, if you haven’t, better to find a cheaper option, especially since there are plenty of talented IT specialists outside the US.

The largest portion of the IT market by 2021. The biggest parts of the Asia industry outcome are China and India. Two absolutely different countries with massive populations. Both of them experience intensive economic growth over the last decades, which provokes the rapid development of local ICT industries. But, the standard of living in these countries is still low enough to cause the average pay rate for IT specialists to be modest $20-$45 per hour, which makes the Asian region one of the cheapest regions for IT outsourcing.

China takes by number, strict governing and 5000-years authoritarian traditions. And it’s not only about the government structures, but private companies. Since the Chinese government softened entrepreneurship laws in the 2000s, the country’s GDP increased more than 10 times. The number of private companies using the “capitalistic” way of doing business skyrocketed, and so the hi-tech industry did. Because of high inside demand, a huge part of specialists in China work in the local market, which is also one of the causes why pay rates are usually low. China’s cheapest freelancers typically work for local companies, so the most qualified ones do. For this reason, and because of the political apartness of China, the country can’t give as many freelancers to the world, as it could, taking into account the size of the population. The language barrier, the difference in outlook, and corporate traditions make the Chinese IT sector detached from the rest of the world and complicate cooperation for Western companies.

India, on the other side, by 2021, is the largest IT market in the world with more than 100,000 individual and corporate IT freelancers. But, no offense intended, due to the young age of the Indian IT industry, most of the services it provides are rated as average or below average in quality. Indian freelancers are speaking English, which is great. But the overwhelming majority of them are low-skilled, often self-taught. Over 80% of Indian specialists are in the “$20” group – paid $20 or less for an hour.

Figure 20 was chosen as one of the most common low-level pay rates for today.

These factors make India and its neighbors Pakistan and Bangladesh a “fast & cheap, but low quality” option. We are not saying, that IT companies in these companies can’t create a high-quality product, we are talking about average.

In Western Europe, we include such countries as Great Britain, Ireland, France, Netherlands, Belgium, Germany, Austria, Denmark, Spain, Portugal, and Switzerland. The average pay rate in these countries varies in ranges from $40-$70 per hour in less developed (in terms of IT industry) countries like Spain, Portugal, and Italy; and $60-$110 in leaders of the region, like France or UK. Western Europe is the second most expensive region, with almost the same distribution of pay rates among IT specialists. If we compared US IT to a luxury car, Western Europe is a business class – a little cheaper, almost the same performance, with one exception – not everyone in Western Europe speaks English.

A rising star in the IT industry among the world regions. In the last decade, countries in the former USSR’s sphere of influence, hungry for hi-tech development, started a huge number of educational programs and built up their local IT industries. For now, such countries as Poland and Ukraine are the best destinations for outsourcing IT services. At the same time, the cost of living in the post-soviet countries is relatively low, thus the pay rates, which could be seen as low in Western Europe or the USA, in Eastern Europe are good money.

These countries could boast of a great number of high-skilled freelancers. The chance to get a well-paid job stimulates thousands of students to start learning IT-related professions. The average pay rate in Eastern Europe is $30-$60, which is substantially cheaper than in the West, but at the same time, you can easily find a developer not less talented than in the US or UK, for example.

Hiring a Mexican, Brazilian, or Argentinian developer will usually cost you from $20-$60 per hour. Latin America has the second-largest quantity of IT specialists growth rate after Asia. But for now, almost half of the IT workers are in the “$20” group, which means either the cost of living affects pay rates strongly or the quality of local developers isn’t high enough. Truly, we are here not to assume.

Only five countries on the continent have any significant amount of IT freelancers – Egypt, Kenya, South Africa, Nigeria, and Morocco. Africa is a pretty cheap region for web and software development – three-quarters of IT specialists belong to the “$20” group. But, surprisingly, in such countries as Nigeria and South Africa, you could find IT companies with an hourly rate of more than $50, which is sometimes even more, than in Eastern Europe or Canada. Most likely due to the significant economic progress observed in these countries in recent years. 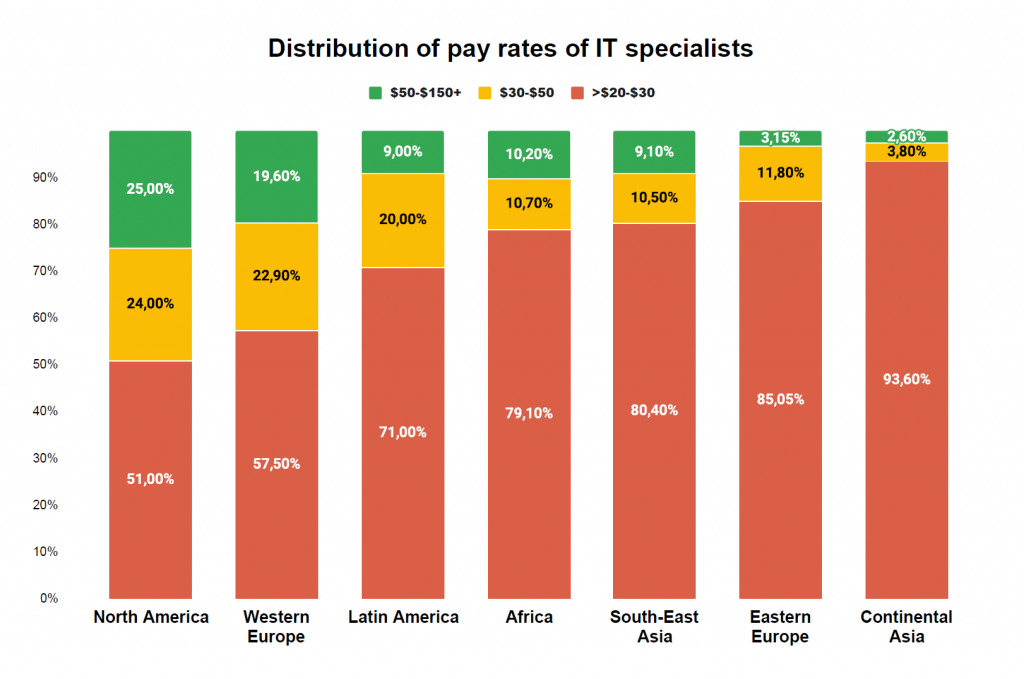 The IT industry is a restless marathon runner. Despite the devastating strokes of the crisis, the IT industry continues to develop, grow, and adapt. Due to the possibility of remote work, IT specialists, like true digital nomads, could move to more profitable places, cities, or countries. And what is more wonderful – the system is self-regulating. When too many talented developers move to one city, the IT service market there becomes overheated, and prices drop, which leads to the relocation of IT specialists, and, eventually, to a normal distribution of human resources.

The IT industry is heading towards a full transition to the cloud, more in-built security, and more standardization. Such tendencies lead to a strong foundation for more complex, full-fledged technologies like IoT, machine learning, and artificial intelligence.

Distribution of IT talents and pay rates difference, for now, correspond to the global economic tendencies with several exceptions like Eastern Europe countries, several countries of Africa, and Latin America. But, the rapid development of the IT community in any country will lead to the growth of local infrastructure, and improvement of social climate and welfare. IT companies in rich countries with high salaries from year to year more and more hire specialists even from the most distant countries. Thereby, they are sharing their wealth with the world, which is quite altruistic.