Future of global IT industry: What to expect

How the business will go in the next 2, 3, or 5 years? How the IT industry will behave? Seems simple, but at the same time ridiculously complex question. Everyone who is in any way connected with the IT industry struggles to know the answer. Because the last 2-3 years were full of, if we may say, “surprises”. The start of this period is clearly visible in the graph below, this sharp drop right after the start of 2020.

We won’t talk much about how the IT industry reacted to all these crises and managed to adapt to the new reality. We described this in our previous articles. Today we are going to talk about the future. 2022 started with another “surprise”, which causes confusion in the world market and for now, global industries still don’t know how everything will end. Such a mood is clearly displayed on the same graph, right at the end – the “kangaroo” market, with the prevailing downward trend. Despite the individual examples of extreme optimism and pessimism, the main feelings of modern business are caution and fear. Fear of…

In general, global economics entered a recession. The US Federal Reserve has signaled it will aggressively raise interest rates to try to control the highest in the last decade’s inflation. The Russian invasion of Ukraine, the slowdown, and the real estate crisis in China’s economy. Markets are overheated, various “bubbles” began deflating, and consumption is declining. Venture capital begins to behave more carefully and is less willing to give money to risky projects. The summary of investments for 2022 is already equal to all the VC investments in 2020 and still higher than the pre-pandemic years. But, despite such positive stats, overall VC activity slowed down significantly, to more than 55% in Q2 in comparison with Q1 2022. 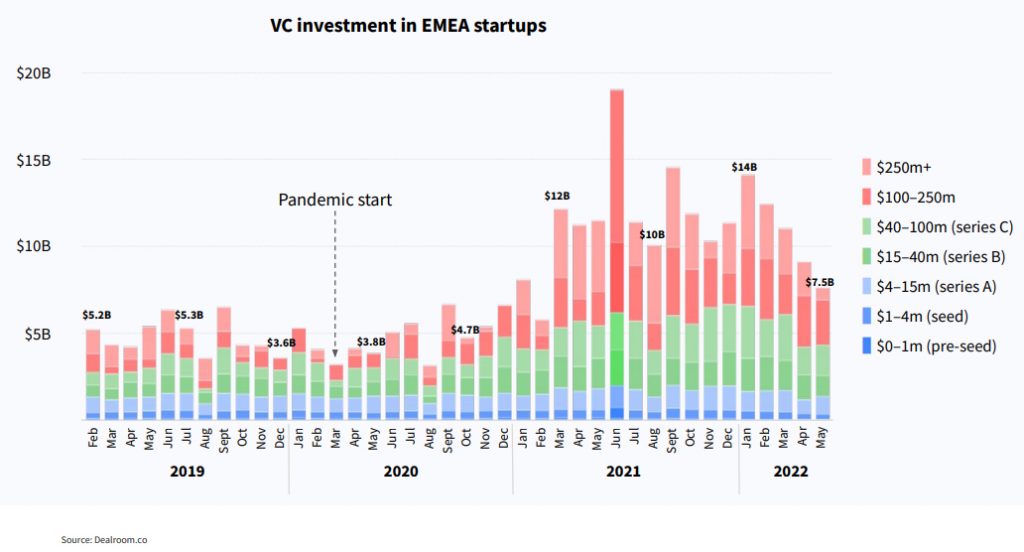 There is still a lot of money, ready to be invested, but it seems to be just the inertia of a successful 2021. Due to the recession, a lot of businesses will be reevaluated in some way. A big chunk of high-tech companies are overpriced and will now fall to their true value.

Web3, in the same way, will throw off a lot of useless projects, and the strongest companies will be left to build a healthy system, instead of what we have now. The competition for VC money will be tougher. Plus, the fear of the changes in the monetary policy of the US Federal Reserve System, forces investors to cut down their shares in high-tech markets. As the famous “bear”, an American investor, and hedge fund manager Michael Burry admitted – in the first half of 2022, the main indexes (S&P500, Nasdaq) fell 25-35% and this could be only halfway down.

What is happening today is extremely similar to the global financial crisis of 2008-2009. This extended crisis was preceded by “long stability” – a period of economic growth and low inflation. Such conditions created a “warm bath” for investors who believed that such conditions – easy access to financing and risky assets with high profits – would be forever. But then the unthinkable happened — real estate prices fell and the house of cards collapsed. Banks were at the epicenter of the storm, and the wave quickly spread to other sectors. As a result, the US GDP collapsed at a rapid pace and the global financial system froze. Entire industries have stopped.

Bitcoin and the main big cryptocurrencies dropped by two-thirds. The CEO of the biggest crypto exchange Binance, Changpeng Zhao (a.k.a. CZ) twitted “It’s a rough bear market” when BTC hit $19,000.

This “crypto-winter” will, eventually, freeze out all the hype-driven projects. The good news is, that crypto/web3/tech-oriented investors learned, that cryptocurrencies are here for a long, and, eventually after crypto-winter there will be a crypto-summer. So, investors are accumulating resources.

Furthermore, numerous countries implement improved regulatory laws regarding digital currencies, which will make this industry less risky, hence more attractive for investors. Whatever happens, happens for the best. By the way, the titans of the tech industry were born during such deep crises – Google, Amazon, Airbnb, Stripe, and PayPal. And speaking of titans…

How the giants feel

The FAANG companies are a great indicator of the tech market’s health. FAANG is an acronym for the five major technology stocks that include Facebook (now Meta), Amazon, Apple, Netflix, and Google (now Alphabet). Today’s crisis, provoked by the Russian invasion of Ukraine, is leading to supply troubles for many countries and international corporations. Inflation forces people to spend less, save money, and cut down unnecessary expenses.

For now, the impression about FAANG’s affairs is mixed. Netflix is losing subscribers, Alphabet has “lower than expected” profits, and Amazon fell short of consensus earnings estimates. At the same time, Meta and Apple showed profits. But in general, giants already have started feeling the shortage of consumers’ interest. Various experts consider tech stocks are oversold. In the current realities of the democratization of stock markets, shares have become even more dependent on the mood of society and human psychology. And their price often does not reflect the company’s profits.

Still, FAANG stocks are one of the most attractive options for “big money” and investors won’t give them up right now. They, presumably, will just low down the activity for a while to wait out. 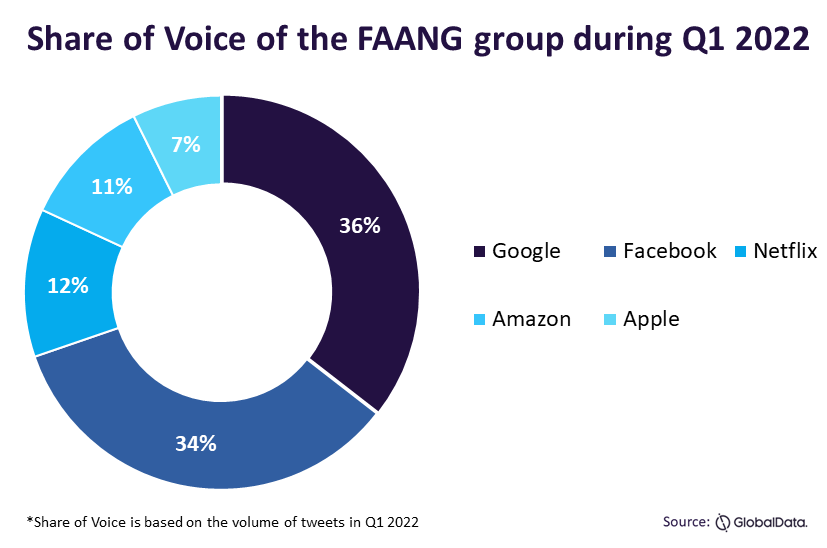 Based on the sentiments of many employees of the IT industry, we can say that the bubble was growing, and now it is the end. Companies were hiring too many people to do useless projects or startups. Now reality will show which of them are really important. Companies will get rid of illiquid projects and weak workers. It’s time to focus on what’s significant to the business.

Learn about ongoing conditions in the global IT market in our previous article.

The fate of startups

David Sacks – founder of Craft Ventures, a US early-stage venture investment firm with $850 million of assets. He backs up his opinion with a quote about his colleague, general partner at VC firm Benchmark, Bill Gurley:

“An entire generation of entrepreneurs & tech investors built their entire perspectives on valuation during the second half of a 13-year amazing bull market run. The “unlearning” process could be painful, surprising, & unsettling to many. I anticipate denial.”

The “amazing bull market run” Bill Gurley mentioned, started in 2009, and since then the generation of entrepreneurs has grown up, who are accustomed to considering constant growth as the norm. But now conditions will change entirely.

The most common recommendations for startups from investment experts are to cut down expenses, not to raise money if you have the alternative, lower your expectations, and plan. Better put the far-from-profit projects on pause, accumulate liquid assets, and don’t make rash movements. The competition will rise, and if a startup wants to stay alive, it’s vital to have reserves.

As an integral part of the modern high-tech world, the IT industry won’t lose relevance anyway. But the global market signals, that tough times are incoming. World economics has plenty of resources, there won’t be a deficit, maybe interruptions in supply. However, there will be a huge change in priorities. If a couple of years ago, big capitals gave up tons of money for “interesting” projects and ideas, in the coming years focus will shift to “promising” and “gainful”.

For the last decades, the IT community created numerous useful and, as a result, widely used technologies. These technologies formed trends and a general vector of tech development. Fortunately, the main trends, like high-level automation (additionally – ML and AI), cloud integration, and constant optimization, now will serve for effective resource allocation. Simply put, during “stable growth” times, those enhancements should help to make/produce more, and now they will help to spend less.

AI will help to take automation to new levels and open a whole new stage of optimization – ideally, everything that could be done automatically (filling, sorting, data analyzing, adjusting settings of the system, etc.) should be given to AI.

Cloud hosting will also reduce costs by speeding up and simplifying access to data, data migrations, and operational efficiency. Not to mention the constant support of data integrity due to permanent backing up.

Our overview could look a bit pessimistic, but we don’t want to be fatalists and say that “The prosperity era come to an end”. This is just our view on the obvious signals of the market and events happening around. It’s just a change of the “Up-Down” cycle, time to prepare for the descent, gain some “fat” and ponder over the radical optimization.

If you want to know, why optimization and automation are good for your business, check out our article on this topic. But if you already have some thoughts about that or considering some upgrade to your system, visit our website homepage, set up a call and let’s discuss! We would be glad to help you out!